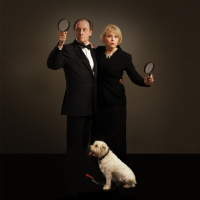 Theatrical Grand Dame, Siobhan Basset (Sara Crowe) presents her personal adaptation of The Hound of the Baskervilles. Lovingly crafted during lockdown in her spare bedroom in Teddington, Siobhan is delighted to bring her magnum opus to the stage. In order to adhere, both physically and fiscally, to government measures, the production stars her husband, Michael (Stefan Bednarczyk) and may have to be achieved without set, crew, lights and sound, and potentially without an audience.

The Yvonne Arnaud Theatre is delighted to present this new comedy by Sara Crowe, directed by Joanna Read and designed by Neil Irish.

Stefan Bednarczyk has extensive experience as an actor, musical director and cabaret performer. As an actor, his work includes a year-long run opposite Gene wilder in 23rd Floor, the West End premiere of Noel Cowerd’s Semi-Monde (Lyric) and The Games of Love and Chance (National Theatre). His films include Florence Foster Jenkins and Mike Leigh’s Topsy Turvy.